As prefabrication, modularization and other off-site construction techniques gain favor among contractors, a new study suggests that a substantial percentage of owners appear reluctant to adopt—or even explore—these methods for their own projects. And that could well pose an obstacle for builders trying to use these techniques to improve productivity and bridge the shortfall in skilled craft labor. 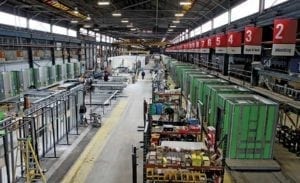 Owners’ aversion to risk and their lack of knowledge about off-site construction—cited by the study as being top impediments to its adoption—are further evidenced by their preference for traditional delivery methods. Nearly half of the surveyed owners say they use traditional design-bid-build delivery, which Ethan Cowles, a principal at FMI and a study co-author, says doesn’t lend itself to the up-front planning that makes off-site construction methods viable. “Changing owner behavior is the big thing,” Cowles says.

But that might be more easily said than done, particularly if owners lack in-house expertise to fully weigh the opportunities and risks associated with off-site techniques. Along with being a departure from conventional construction processes, the economics of off-site methods often necessitate different products, materials, vendors and supply chains, which can vary from one project to the next.

What’s more, owners must decide early in a project whether to use off-site methods—something that many of them are unwilling or unable to do, says Pete Dumont, vice president of global strategic projects for nVent Thermal Management, Houston, and president of CURT. Even when information and expertise is available, Dumont adds, opting for off-site construction requires more thought. “It’s not always a slam-dunk decision,” he says.

Deciding early on to use off-site construction methods may also be impractical for some types of projects. While many health care facilities are making use of prefab components such as overhead corridor racks, bathroom stalls and patient-headboard assemblies, some spaces built around specific types of equipment don’t lend themselves to standardization.

Given the long lead times associated with these types of projects, says Rob Taylor, president of Birmingham, Ala.-based Brasfield & Gorrie, “there’s a concern that the technology will change” in the interim, minimizing the potential benefits of prefab. 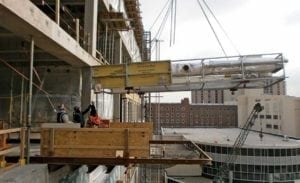 example, Skender described an upcoming publicly funded building project that would have been well suited for modularized construction delivered by his firm’s new manufacturing arm, which includes a southwest Chicago facility dedicated to those operations. Skender contends that the off-site methods would have helped to accelerate the project’s schedule, a proposition that might have appealed to many private-sector owners.

But given the funding structure of the public-sector project, Skender adds, the owner could face penalties for early completion. “That means the project has to be done the old way,” he says.

Overcoming such statutory and regulatory barriers may be a long and difficult process, observes Sabine Huynen Hoover, FMI’s content director and co-author of the owner study. The “tipping point” comes, she says, as more contractors develop expertise to perform off-site construction and owners become more aware of the downsides of conventional methods.

“We hope it will happen,” she says, “but we don’t know when that will be.”

That fact that the learning and acceptance curve for off-site construction parallels that of design-build is not lost on Dumont. “There’s a reluctance in our industry to be the first to experiment,” he says. “The culture does not lend itself to adapting new things.”

But Chris Giattina, CEO of BLOX, a Birmingham, Ala., design-manufacture-construct firm, emphasizes that off-site construction represents a bigger paradigm shift on the owner’s part than integrating design and building services. He notes that off-site construction is achieving the biggest success among “serial builder” owners with a significant amount of work or those seeking to drive out waste.

As such, they see off-site construction as “an important tactic in a strategy that emphasizes productivity,” Giattina says. Rather than taking a passive approach, he adds, “they make a decision early on and say, ‘this is how project will go.’ Then everybody is working from that premise.”

Owner education may well be the key to fostering a greater understanding and use of off-site construction, but contractors must first make a compelling case for it. FMI’s Cowles says it begins with understanding the value proposition of the owner’s project and how the design and construction team can add to it. “Too often, construction folks don’t think about it,” he says. “They need to share more information and help the owner understand what’s possible as it relates to the business case.”

“Until you get pressure to change, you’ll probably do things the same way.”

If an owner remains reluctant or unable to use off-site construction, contractors are advised to build their own knowledge and capabilities, Cowles says, even if they lose money early on. “As soon as an owner recognizes the risk of traditional construction and wants to try modularization or prefabrication, they will look for firms that can do it,” he says. “And if you can’t, they’ll look elsewhere.”

Dave May, president of Roeslein & Associates Inc., St. Louis, which specializes in design-manufacture-construct projects for the beverage industry, says that realization may come sooner for some owners than others.

“Until you get pressure to change, you’ll probably do things the same way,” May says. But as the labor supply shrinks and becomes more expensive, “that’s when you learn how to do off-site construction and see the opportunities that are available.”

Skender cites recent productivity studies (“Improved Productivity Requires New Management Mind-Set,” ENR 2/13/17 p. 22) for influencing his firm’s strategy to acquire design services. “To make modular and off-site construction work, we had to have more control over the design,” he says. Eliminating barriers between design and construction results in a product-delivery approach that Skender expects will become more appealing to owners.

“We’re at a point of convergence of escalating construction costs, lack of skilled labor, client frustration with current project-delivery models, and advances in technology,” he says. “Owners feel they have to seek alternatives.”

Hoover notes that contractors shouldn’t feel pressured to become immediate experts in off-site construction, particularly if they’re not seeing a strong pull for those methods from owners. Alliances with product manufacturers provide ideal opportunities to exchange expertise, she says.

Hoover says that while many owners may know what to look for in off-site construction, contractors shouldn’t wait for them to ask. “The idea may not be used today or tomorrow,” she says. “But if that opportunity does arise, you want to be ready.”